Drinking is one way to unwind or spend time with your family, workmates, or friends, yet you must control it to avoid experiencing alcohol use disorder. Having said that, you or any other people can be “weekend” alcoholics, meaning you binge drink during Saturdays or Sundays. Now, is this a problem or not?

Binge drinking once a week is never fine since it can put you on a higher chance of developing alcohol tolerance and dependence. if you want to enjoy drinking alcohol, the suggested limit is usually two standard drinks for men and one drink for women per day, to avoid binge drinking.

If you’re experiencing uncontrolled drinking, then perhaps, you should think about talking to a counselor or doctor about it before things get worse. Read further to learn more about the health consequences of binge drinking and alcoholism.

What are the signs that you’re heading towards binge drinking? 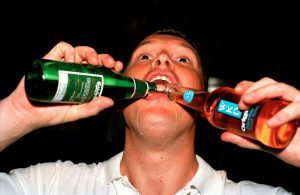 You can have various reasons why you’re drinking one bottle after another but regardless of your reason, excessive alcohol drinking does no good to your body. It puts you at a greater height of danger for physical injury and illnesses. Alongside this, here are the common signs that you are developing an alcohol drinking problem.

Drinking alone or as a means to cope

Well, we know that some of you put a glass or two of your favorite wine or alcoholic beverage while you read your book or enjoy a cold bubble bath. This might still be okay as long as you just keep it on that level.

However, it becomes a problem when you make drinking a habit, especially when you use it to cope with depression or any tragic events in your life. Consequently, you need to talk to a psychologist or counselor about your drinking problem to stop it as early as now.

You do dangerous things when you’re drunk

Most people become unaware of their actions when they’re under the influence of alcohol, that they tend to do ridiculous and dangerous acts such as drunk driving. If you do this when you’re drunk, then avoid binge drinking for your own sake and the safety of others. 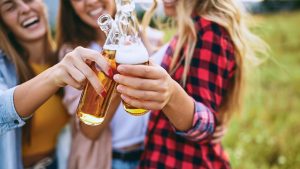 At times, drinking is highly unavoidable when you are with your friends and workmates. Especially when you’re offered a drink as you catch up with them and share your experiences for the times you’ve been separated.

However, if you’re drinking for the sensation alcohol provides and not for your friends’ presence, then you’re at risk of developing alcohol dependence. Having said that, you shouldn’t binge drink since you are vulnerable to an alcohol use disorder.

You cannot control yourself when you start drinking

Take note, the recommended limit is usually two drinks for men while one glass for women per day. If you cannot control yourself, then we highly recommend that you stop drinking at any time of the week.

Binge drinking in the U.S.

In the United States, most binge drinkers are within the age group of 18 to 34 years, while headcount drops as they grow older. However, drinking at an early age puts you at a greater risk for alcohol use disorder, so you need to stop as early as possible.

Furthermore, here are some highlight statistics and data for the status of binge drinking in the U.S.

What are the negative health effects and consequences of binge drinking?

Binge drinking happens when your blood alcohol concentration (BAC) rises to 0.08 g/dL, or when you consume five glasses for men, while four glasses for women in less than two hours. Currently, one in six Americans ages 18 years and older binge drink, and most of them suffer from physical injury afterwards.

In line with this, here are some of the common adverse consequences when you drink too much alcohol on a daily or weekly basis:

All things considered, if you’re already having uncontrolled alcohol consumption, then you should talk to a doctor or addiction expert since they can give you insightful advice and customized treatment plans. Anyhow, take time to internalize everything, especially your condition and your dire need for external help from professionals and your family.

What are the long-term effects when you drink too much?

Your possible journey towards alcohol addiction starts when you consume more than five or four drinks in a row. If you notice that you’re having a difficult time controlling your drinking patterns, then better pause for a moment and consider talking to a therapist or doctor. In doing this, you are preventing alcohol use disorder and its detrimental long-term effects.

Alongside this, here are the serious side effects of alcoholism in the long-run:

When is the right time for treatment?

If you cannot directly cut off your alcohol consumption, you will need the assistance of medical professionals or addiction specialists to help you plan for your customized rehab program.

Having said that, don’t be afraid of reaching out to your local rehab center or doctor regarding your concern with alcohol use disorder or binge drinking. Now is the right time for you to change for the better, so take that step towards gaining back your healthy life.